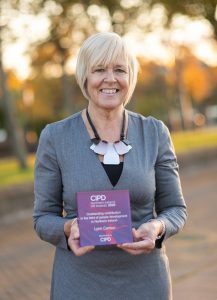 Not only did DMS reach its '21 years in business' milestone in October 2020, the Managing Director, Lynn Carson also received the CIPD Northern Ireland’s Outstanding Contribution in the Field of People Development Award 2020.

Chief Executive of CIPD, Peter Cheese, announced Lynn’s special Award: “this is an award that we give each year for individuals who most demonstrate real excellence in what we do, impact, but also acting as ambassadors for our profession at large.”

Peter recognised Lynn’s accomplishments as not only MD of DMS Ireland where she led the development of so many HR professionals over 21 years (over 3000), but also her roles with the NI branch over the last 11 years, the last 4 of which were as Chair before stepping down recently.

These accomplishments, Peter continued: “really well reflect why we believe she is a very deserving recipient of the outstanding contribution award.  She reaches beyond our profession, acting as an ambassador for our profession within Northern Ireland and beyond."

Peter acknowledged Lynn as a fantastic colleague, friend and mentor to so many and that since his time as Chief Executive at CIPD, she has demonstrated “fantastic attributes of professionalism, real competence and excellence.” 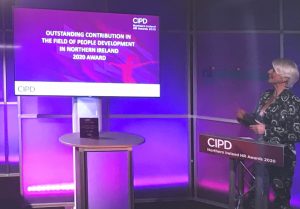 Receiving her Award at the CIPD Northern Ireland Virtual Awards, from host, Pamela Ballantine, Lynn Carson explained: “In my day job at DMS Ireland and in my previous role as Chair of CIPD NI Branch, I was used to presenting awards to individuals.   I genuinely love what I do on a day-to-day basis.  Working with those in the People Profession and helping them progress in their career, through the CIPD Qualifications and coaching, gives me so much pleasure and pride to see the difference and impact they make not only to their organisations but also to themselves.  I have a passion for learning and through this I love to see the opportunities there are to learn, improve and innovate and for me to hopefully inspire others to promote a learning culture."

DMS Ireland has worked with over 3000 individuals to gain professiona 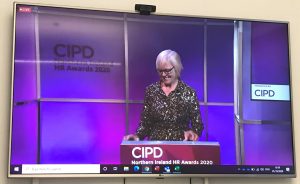 l qualifications and recognition in the field of Human Resources and Learning & Development since its inception in October 1999.  Based in Bangor, DMS also works throughout Ireland (North and South), the UK mainland.  As a centre, the team have adapted quickly and robustly to the changing environment that the global pandemic has brought, continuing throughout to provide flexibility and choice to individuals and organisations and meeting the unique challenges around us.   DMS is a leading supplier of CIPD Qualifications to the Irish Civil Service, the Driver & Vehicle Licencing Agency (UK, Swansea-based) and the Department for Transport (UK, Swansea-based) and is currently working with over 350 individuals on CIPD Qualifications at levels 3, 5 and 7 (comparable to 5, 7 and 9 in Ireland) throughout all sectors.

This website uses cookies to improve your experience while you navigate through the website. Out of these, the cookies that are categorized as necessary are stored on your browser as they are essential for the working of basic functionalities of the website. We also use third-party cookies that help us analyze and understand how you use this website. These cookies will be stored in your browser only with your consent. You also have the option to opt-out of these cookies. But opting out of some of these cookies may affect your browsing experience.
Necessary Always Enabled
Necessary cookies are absolutely essential for the website to function properly. This category only includes cookies that ensures basic functionalities and security features of the website. These cookies do not store any personal information.
Non-necessary
Any cookies that may not be particularly necessary for the website to function and is used specifically to collect user personal data via analytics, ads, other embedded contents are termed as non-necessary cookies. It is mandatory to procure user consent prior to running these cookies on your website.
SAVE & ACCEPT